On Thursday, January 27 True South Solar, a locally-owned solar startup, and Ashland Mayor John Stromberg will cut the ribbon and power up the largest solar-electric system in Southern Oregon. 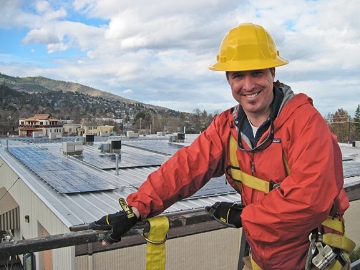 Installed at Ashland-based Darex, LLC, maker of the world’s best-selling industrial drill and tool sharpeners, the 110.63 kilowatt system will generate over half of the company’s annual electricity needs.

The new solar system will pay for itself in savings and credits in just four years. Darex, LLC’s solar investment is projected to yield an initial internal rate of return of 17 percent over 35 years. If electricity rates rise at 6 percent per year, the rate of return increases to 20 percent.

For perspective, the True South installation will offset the energy consumed by approximately 13 typical Ashland households. Over its 25-year life, it will save almost 3,000 tons of the greenhouse gas carbon dioxide (CO2) from polluting the atmosphere, or the equivalent of over 5.8 million auto miles.

True South built the system with major components sourced from Oregon-based companies including PV Powered of Bend and Deck Monitoring of Eugene.

“Our new solar system will give our bottom line a boost by generating decades of free electricity,” said Hank O’Dougherty, president of Darex, LLC. “Investing in solar is a sound business decision and in line with our goal of being a good steward of the environment. During early tests of the system, we were even making power on a rainy day. Now that’s fun!”

“Oregon is going solar at the speed of light,” says Eric Hansen, General Manager of True South Solar. “Lower prices, better technology and some of the best tax credits and incentives in the country are creating a perfect climate for Oregon businesses to run on sunshine.”