“Solar’s Got Talent” is the name given by an Oregon clean energy co-op for a collaboration with three Talent institutions that obtained $149,656 in state grants to help construct solar arrays with battery backups.

Electrical energy generated will replace from 55% to nearly 100% of current consumption at the locations. The projects will help the city toward a goal of 100% clean energy use by 2030. 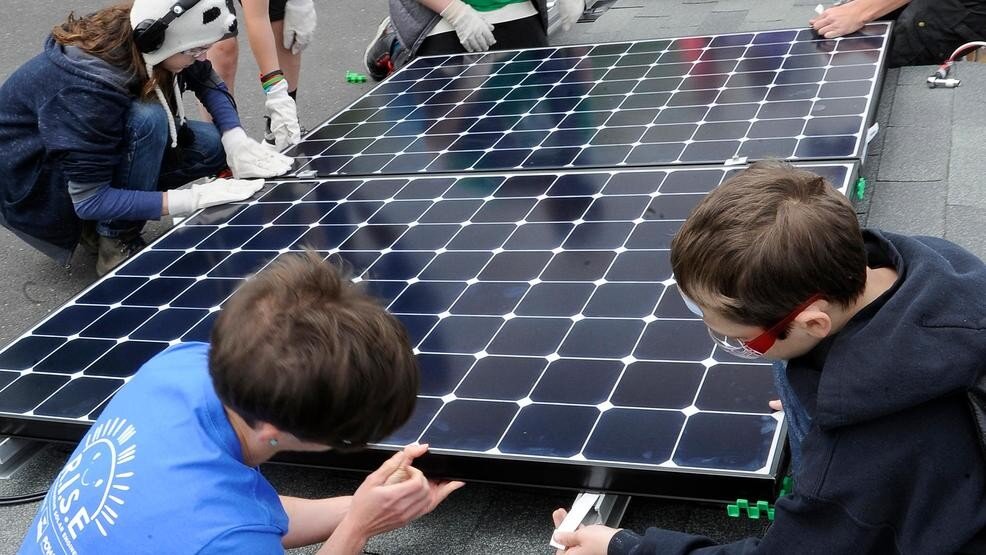 “Oregon Clean Power Cooperative has been the real driver here. They put the proposals together, they figured out the funding. I give them a lot of credit,” said Ted DeLong, general manager of the Oregon Shakespeare Festival. The festival’s production building on Talent Avenue will get one of the arrays, along with Jackson County Fire District No. 5 on Highway 99 and the city’s downtown civic center.

Oregon Clean Power Cooperative will also sell bonds to finance the three projects, which have an estimated cost of $504,500, to Oregon investors and will handle the design and construction. They have used a similar model for about a dozen installations in the state, with another half-dozen coming online this year.

“What we offer is a unique possibility, a unique way for people to invest in renewable energy in their community and get their money back,” said Dan Orzech, general manager of Oregon Clean Power Cooperative. The group has found that many local residents are willing to invest in their local projects. Previous projects have given a four-percent rate of return, and investment is limited to Oregonians.

Agreements that finalize the arrangements between Oregon Clean Power Cooperative, the Energy Department and the institutions are expected to be signed in the near future and cover things such as performance and electrical purchase from the co-op. Construction timelines haven’t been established yet.

Oregon Clean Power Cooperative in conjunction with the three entities submitted the grant requests to Oregon Department of Energy’s Renewable Energy Development program, which is in its last year. Besides the grants and bond sales, an investment incentive from Energy Trust of Oregon will cover about 10% of costs. After 12 years the institutions would have the option to purchase the installations at market value, which would be nominal by then, said Orzech. They would then have free electricity except for system maintenance.

The city of Talent received a $40,491 grant to help with installation of a 75-kilowatt, ground-mounted solar system with a battery backup to be constructed on city land behind the Community Center. Total cost of the project is estimated at about $110,000.

The array is estimated to cover 79% of the electrical needs for the center, Town Hall, City Hall, the Historical Society and the Depot building, which is currently leased to private businesses. Power generated would replace that currently purchased from Pacific Power and is projected to cost less.

Fire District 5 was awarded $39,887 for a 70-kilowatt array with battery backup that would be built by its headquarters. The installation would occur between the building and a riparian area to the northeast, said Chief Charles Hanley. The project would supply about 100% of the building’s energy needs. Project cost is estimated at $153,000.

“It’s one of those things where you are leading out and an example for the community,” said Hanley. The battery backup will help harden the building, which already has an emergency power system in place, he said. It will be the first solar installation for the district, but he oversaw solar projects while a chief in Contra Costa County, California.

Oregon Shakespeare Festival was awarded $68,828 to assist with a 100-kilowatt solar array with battery storage. OSF built the 64,500-square-foot, multistory building, which includes scene and costume shops, in 2013. An estimated 55% of the electrical needs would be met with the arrays, which will be placed on the roof. Over a 25-year period it is estimated to save the festival about $290,000. Project costs are estimated at $241,500.

“This is one that I have been working on with OCPC for a least three or four or five years,” said DeLong. “I started going to meetings in Talent. We talked about how we could help meet Talent’s goals.”

Talent’s Clean Energy Action Plan was adopted by the City Council to address climate change issues. The plan calls for the city as a whole to reduce energy consumption though a variety of strategies and to replace all fossil fuel-generated power with renewable energy by the year 2030. It was developed by Talent community members in 2016 in partnership with Together for Talent and Rogue Climate.

Source: by Tony Boom for the Mail Tribune