The Oregon Solar Energy Industries Association (OSEIA) is a trade association founded in 1981 to promote clean, renewable, solar technologies. OSEIA works with industry leaders, academic scholars, legislators, government, and nonprofit agencies to advocate for solar technologies and raise awareness of its potential to help secure an affordable, reliable, and clean energy future. Our own Eric Hansen, General Manager of True South Solar, currently serves as OSEIA’s board treasurer. OSEIA has observed tremendous growth in the solar industry and is ready to contribute to further expansion by hiring a full time Executive Director. 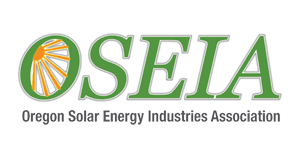 Join True South Solar in welcoming Angela Crowley-Koch to promote a solar energy future that will restore Oregon’s standing as a leader in the country. Angela Crowley-Koch has spent the last two decades in public policy and advocacy.  Previously the Legislative Director at Oregon Environmental Council, her work was instrumental in passing the Toxic-Free Kids Act, renewing the Clean Fuels Program and getting coal out of Oregon’s electricity mix, among other bills. She worked for Senator Jeff Merkley as part of his Blue Wave Project in 2018, as a Legislative Assistant in D.C., and as the call room manager on his 2008 campaign.  While in D.C. she negotiated policy for Oregon in the the Food Safety Modernization Act and the MAP-21 transportation package, including closing a loophole in the Buy America rules, among other policies. Angela moved to Portland from the Chicago area in 2000 and now lives in North Portland with her German Shepherd Neko.